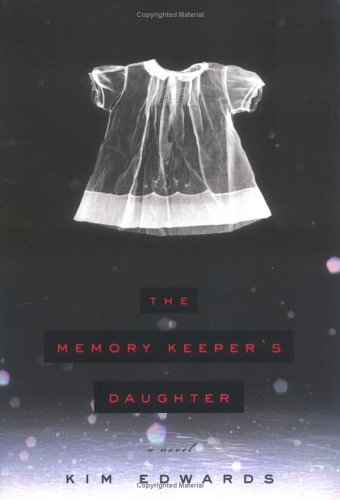 From the back of the book:

This stunning novel begins on a winter night in 1964, when a blizzard forces Dr. David Henry to deliver his own twins. His son, born first, is perfectly healthy, but the doctor immediately recognizes that his daughter has Down syndrome. For motives he tells himself are good, he makes a split-second decision that will haunt all their lives forever. He asks his nurse, Caroline, to take the baby away to an institution. Instead, she disappears into another city to raise the child as her own.

After reading the excerpt, I immediately bought the book. It sounded like such an intriguing story, something I would really like. And ok, I admit, I really liked the cover image.

But unfortunately, I didn’t connect with the characters at all. Perhaps it was because I haven’t personally experienced any of the issues in the story – loss of a child, dealing with deep personal grief, living in a difficult, empty marriage, keeping dark secrets from loved ones, not taking control of your life until you discover that you’re 40 and full of sadness and regret.

So maybe others will find it to be exquisitely moving and touching.

For me, I was mainly annoyed with the characters, and overburdened with the intricate detail of someone else’s tragic life.

Having said that, it wasn’t a badly written book. I finished it in less than a week.

There were some really beautiful moments as the characters faced their grief and confusion – moments of the past, layered and entwined with the details of the present. If you don’t like long, poetic paragraphs of snow falling, soaked with memory flashbacks, the book’s probably not for you.

I’ve been blogging since 1999 – which is 20 years of sharing stories about my kids, motherhood, fashion, fitness, food, books and all my weird and wonderful daily adventures.

Stick around if you like a mixture of fashion inspo, book updates, annoying teenager stories, updates about the work/motherhood juggle and plants.